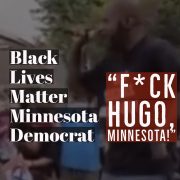 John Thompson is running for the Minnesota House District 67A and just won the August 11, 2020 Democrat primaries.

Thompson has been endorsed by the Democrat Governor of Minnesota Tim Walz and other Democrat politicians including Betty McCollum. The Somali Hoda Hassan has called him “my brother”. Why is she calling him “my brother”? Is he a Muslim?

Thompson’s campaign website also shows a picture of him and Keith Ellison, another high-profile Minnesota Muslim.

Recently John Thompson picketed the home of Lt. Bob Kroll, President of the Minneapolis Police Federation. In his racist rant laced with obscenities, he went as fast as calling Bob Kroll “a grand wizard” and “a klansman”, ending it with “if the people in Hugo, Minnesota won’t support black people, fuck Hugo, Minnesota”. A Black Lives Matter has threatened that they will harass Lt. Bob Kroll and his family by picketing his home again in the future.

Here’s the same meltdown from another angle – the whole thing! That’s one angry thug right there. Will the Democrats withdraw their endorsements of him?

The Republican candidate for 67A John Stromenger has no web presence and doesn’t seem to be a serious challenger, which almost but guarantees the Black Lives Matter activist John Thompson a win in the November 2020 Minnesota elections. The Minnesota Democrat Party is becoming more radicalized with each election with more radical leftist and islamist candidates entering races, advancing to elections, and winning seats.