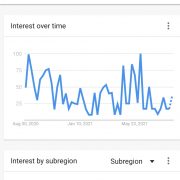 I guess Minnesotans really want to know all about Islamophobia more than people in any other state in the union in the last 12 months.

You can see for yourself this google trends report showing clearly Minnesota leads every other state in the US when it comes to searching all things Islamophobia.

If nothing else, this is good news at least in one aspect – it’s a confirmation this website is doing exactly what it should be – competing against a plethora of Minnesota based, pro-jihadist propaganda websites. The idea here is to create content for an audience wanting to know about this issue.

The reality is that currently pro-Jihadist entities are the ones dominating this space. They are ceaselessly spewing out all kinds of propaganda about ‘Islamophobia’ and hardly anyone has ever bothered to oppose them.

But why you might ask? Why haven’t others attempted to counter this jihadist propaganda?

Here’s my guess: people who don’t buy the “Islamophobia” BS simply roll their eyes and switch to a different channel. What they don’t understand is the power of perception and how propaganda works.

Every time the media begins to push certain narrative, it has nothing to do with whether it makes sense or not, or if it’s true or not. All that matters to the globalist propaganda machine is that it works. Nothing more, nothing less.

So, dear Minnesotans who are searching for Islamophobia and what it means and what it’s all about, let’s make this easy for you: Islamophobia is a fake code word invented by shameless leftists in order to shame YOU into silence.

Islamophobia has worked for them very well in the last 20 years and they want to ride this thing until the wheels come off.

The goal of the Islamophobia hoax is to condition you to suppress your common sense and your very survival instinct. It’s meant to cast jihadist as victims who kill us, blow us up and terrorize us…so they can defend themselves. Because we’re so racist and Islamophobic, right?

The real racist and “supremacist” are the likes of Saudi Arabia, Somalia and a host of other jihadist countries whose entire purpose of existence is to do the will of their made up “deity” and subjugate the world for Islam.

They will fall. The sultan has no clothes! Their lies will be exposed for all to see. Our Islamophobic efforts will succeed 😉